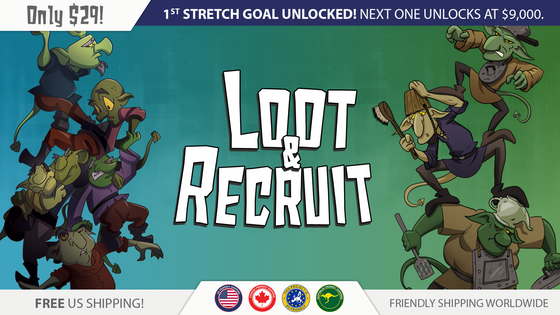 Loot & Recruit is a deck-building game that brings a twist to the genre through its stacking mechanism, dual currency system, and PvP elements. Become a contestant in a crazy Goblin festival as you compete for the title of Goblin King. During the festival, you will add new cards to your deck, recruit Goblins for victory points, attack other players, and hire minions to perform special actions. Do you have what it takes to loot and recruit well enough to claim the throne for yourself?

Latest Updates from Our Project:

All files have been sent over to the factory and we have not received an eproof as of today. We have been told by the factory representative that the first eproof should be here by tomorrow or the beginning of next week.

Thank you for your continued patience.

Hope everyone has had a great holiday season and we just wanted to give you a quick update on how things are going. Not a whole lot has changed but we want to keep y’all in the loop.

Once things get rolling, we hope to have this game in your hands by April 1st. However, because of manufacturing overseas some time delays are possible, but when we know, you’ll know!

Thanks for your continuing support and patience,

First off, we want to let you know that Screech Dragon Studios has acquired Vile Genius Games and this is why you haven't heard anything about this amazing game in a few months. All projects will be fulfilled and completed in due time. So now we're here now to give you an update on the goings on!

All art files are completed and have been sent to the manufacturer. We hope to have an eproof back by the end of January so we can move forward with manufacturing.

Once things get rolling, we hope to have this game in your hands by April 1st. However, because of manufacturing overseas some time delays are possible, but when we know, you’ll know!

We hope everyone has a terrific holiday season,

Hello all you Looters out there,

However, what you want to hear about is the status of the game, so let’s go over some key points.

After Gen Con we were ready to send all the files over for manufacturing, but our updated price quote for the game came back way higher than original estimations. So, we started the process of talking with other manufacturers to see if we could get the price back to where we were originally estimating. Luckily, we were able to get the price to where we wanted, and manufacturing is ready to begin. Once we get an E-proof from the manufacturer we’ll let you know.

If everything goes smoothly from here on out we’re estimating to have the games in your hands in January. We originally planned to have the game in your hands this past summer, so we’re well aware we missed the mark on delivery. However, we thank you for your patience on this process and obviously, the delays are not ideal for anyone.

One important thing that did transpire over the last few months was the merger between Vile Genius Games and Screech Dragon Studios. One of the biggest impacts this has is it provides us additional resources to ensure the games we make get to you quicker.

We will continue to improve our communication and do our best to keep you informed of the status of the game.

As always thank you for your support!